All pests are problematic, but some will create a bigger headache than others. If you’re dealing with a termite infestation, it is pertinent to act quickly. These social creatures work as a team to ensure that the colony thrives for many years to come. Whether they’re searching for food, water, or shelter, they’re going to work together. In addition to this, they’ll work diligently to build new colonies. One thing that sets termites apart from other pests is their insatiable appetite for cellulose. Although this material is found in plants, it can also be found in cotton fibers, cardboard, furniture, and lumber. Therefore, there is a risk that these pests are going to create numerous issues for you and your loved ones.

At some point, termites are going to build mounds. They begin building mounds once the colony outgrows its underground nest. It uses the mounds to expand further. Some of the termites in the colony will burrow into wood surfaces and create nests there. When this happens, you’re going to find small mud tubes that they use to access nearby food sources. In the United States, Subterranean termites are the most concerning. They are more common than others and cause 95% of the roughly $2 billion in damage to American structures annually.

It is important to learn more about the unique structure of termite colonies. These pests have several important members. For instance, the colony will have a king, queen, worker termites, and soldier termites.

A termite colony cannot thrive without working termites. They’re one of the most important members of the colony because they help expand it. She can grow up to 4” in length so she is the biggest member of the colony. When she needs to move through the tunnels, hundreds of worker termites will have to push her. The queen and king work together to produce more eggs to ensure the colony has enough worker and soldier termites.

In some cases, a queen termite can live up to ten years and lay more than 30,000 eggs every 24 hours.

Kings and queens work together to ensure that the colony continues growing and expanding. The king isn’t as big as the queen, but he is still one of the biggest members of the colony. The king’s primary responsibility is to help the queen produce more eggs. The pair will continue mating for the rest of their days.

Each termite colony will have thousands of worker termites. These termites feature soft bodies and a light color. They do not have wings. In general, workers will reach 10mm in length so they’re roughly the size of a piece of rice. Worker termites are equally important because they perform many of the necessary tasks around the colony. They’re going to help find food, build tunnels, and care for other members of the group.

It is common for worker termites to work 24 hours a day and 7 days a week. They never stop.

Each year, the colony is going to produce swarmer termites. These termites can be male or female and they’re normally produced each spring. Winged swarmers have one goal. They are created so the colony can spread to new areas. Once the winged swarmers are produced, they’re going to leave their colony and build new colonies in other locations. Again, they can be male or female. As a result, they’ll be able to reproduce and create new colonies on their own.

A termite colony can have thousands of winged reproductives, but it will have one king and one queen.

Which Termites Are Found In Our Area?

As a resident of Toledo, you’re going to encounter several species of termites. However, you’ll find that a few specific species tend to be more common than others. In Toledo, most of our clients encounter problems with Subterranean termites. Unfortunately, these termites are incredibly common and destructive. Once they’ve invaded your home, they’re going to start destroying your belongings. With this in mind, you’ll need to get rid of them promptly. The colony consists of several members, including workers and soldiers. Although they look the same, soldiers have longer heads and stronger mandibles.

Swarmer termites can reach half an inch in size. They’re produced in spring so they can spread out and build new colonies.

What are Subterranean termites going to do once they invade your property? In general, these pests will build underground nests around your home. They can travel hundreds of feet away from their nest to reach food sources. Some will live in moist spots above ground. When they need to access food sources, they’re going to build mud tubes. Doing so allows them to access food without having to worry about being attacked by predators. Again, swarmers are produced in spring so the colony can spread further.

The primary problem associated with Subterranean termites is the fact they’re destructive. These pests will destroy your wood columns and furniture. Worker termites have tough saw-like jaws that allow them to chew off pieces of wood. Then, they’ll feed the wood to other members of the colony. When the infestation is ignored, the termites will severely damage your home.

Facts About Termites In Toledo

It is important to learn more about the termites in your area. Below, you’ll learn unique facts about termites in Toledo, Ohio.

Removing Termites From A Residential Dwelling

Don’t stop until you’ve removed the termites from your home. Unfortunately, this is going to be harder than you could ever imagine. The problem is that termites are difficult to eliminate. First, they’re hard to find since they can travel a long distance from their nest. They may travel up to 300 feet from their nests to reach your home. Furthermore, they can use a handful of underground tunnels to reach food sources. Nevertheless, termites are weak and easy to kill. They’re often killed by ants and other small predators. Still, it is hard for humans to wipe out an infestation. It will be hard to find out where the termites are coming from. Then, you’ll need to work diligently to eliminate the pests and make sure they do not return.

It is best to work with a qualified expert. Doing so will make things much easier in the long run. Get in touch with us when you’re ready to defend your home.

Many consumers are eager to deal with the problem on their own, but this may not be the best option. Unfortunately, DIY methods may not be effective or safe. If you’re dealing with an infestation, we recommend hiring a professional exterminator. Doing so will put your mind at ease and help ensure that the problem is going to be dealt with efficiently. If pesticides are used or mixed incorrectly, there are immense risks. Therefore, it is wise to hire a local exterminator. We can help you deal with the termite pest infestation. Contact us and we’ll fix the problem right away.

When can you expect to hear from us? After your call, our representative will get back to you within 24 to 48 hours.

When dealing with a termite infestation, it is pertinent to protect yourself and the ones you love. However, you’ll also want to wipe out the pests quickly. We can help you achieve these goals. We eliminate termites using the latest EPA-registered products. We know that we can fix the problem while keeping everyone safe. Our technicians follow precise protocols to guarantee your safety. Although our techniques deliver rapid results, they’ll keep you safe too.

Once you’ve eliminated the termites on your property, do what you can to prevent them from returning. Use the advice below to keep these pests away from your property.

Are you concerned that termites have invaded your property? Don’t hesitate to contact our Toledo office. 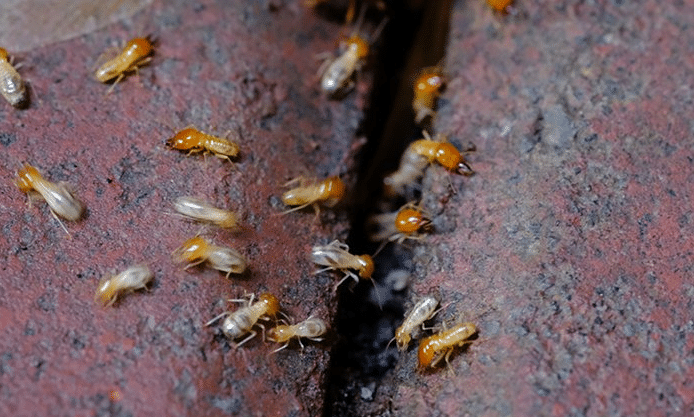