The Need To Know Facts About Fleas

If you’ve ever owned a pet or stopped to feed the wildlife, you’ve likely thought about fleas. At the very least, you know the insect exists. You might not know everything there is to know about the insect and that’s okay. We are pest management pros and well tell you, we don’t know everything. We can learn and uncover information together. That being said, we do know that the flea is much more than just a nuisance pest and needs to be eradicated immediately. They don’t just pose a major threat to your pets, but they pose serious health risks to you and your family. Fleas have been known to carry and transmit diseases as serious as typhus and the plague.

What Are The Most Common Fleas In My Area?

Just like other insects, there are multiple species of fleas. Some fleas are indigenous to specific areas, while some can be found in warmer climates. Some might only tend to invade and infest pets, whereas some species will infect both humans and pets. While there are a variety of species, we can tell you that it is the Cat Flea that is the most common in our area. And, do not be fooled by the name. Just because their name is associated with felines, it doesn’t mean that they only invade the cat. The Car Flea can be found on anything from dogs to opossums, raccoons, skunks, and foxes. Oh, and don’t forget about the human. They’ll also invade the human.

While there are many unique things about this species of flea, it is probably their size that makes them stand out the most. They are only 1/8 inch in length and extremely slim, about that of a credit card. This affords them the ability to easily skirt through pet hair as well as human fingers.

Flea bites are a serious matter and should be taken as such. There are some rare reported cases where severe flea infestations have even led to death. That’s right, death! However, in some less severe cases, bites will only result in hair loss. This is usually from constant scratching or the development of a flea allergy known as dermatitis. Dermatitis is an allergic reaction that happens in some individuals when the proteins in the flea’s saliva react with the host’s blood. To make matters even worse, fleas are also hosts of tapeworms. These tapeworms can and will infect pets or sometimes even humans.

You can likely see from the information above that fleas could be a major problem. And, this is why we have shown you this information. We want our customers to understand the importance of eliminating a flea infestation as early as possible. Stopping the problem before it becomes a major issue. That being said, it would be best to prevent the problem before it even happened. Of course, prevention is always much easier said than done. This is especially true when dealing with an insect such as the flea. With all that in mind, there are some helpful tips that you can apply to help with flea prevention. Here are some things to consider:

Unfortunately, there is nothing you will be able to ever do to completely eliminate the threat of fleas, especially if you have pets or feed wildlife. Of course, that doesn’t mean you can’t do these things. It just means you need to do them with the right intentions in mind. This is something we are more than willing to help with. After helping you successfully eliminate your flea infestation, we can help you devise and develop a prevention plan. A plan that might help keep your property flea-free for the foreseeable future. 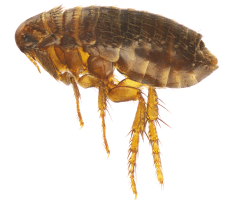